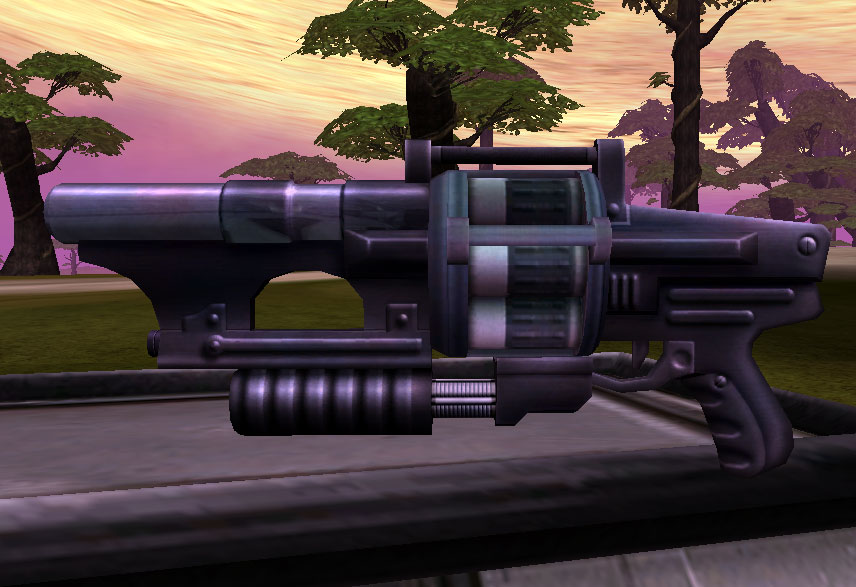 Also known as the "Grief Machine" when in the hands of an inexperienced user, the Thumper is a very powerful anti-personnel grenade launcher. Capable of equipping all types of grenade rounds (Fragmentation, Plasma, Jammer), it is a versatile weapon and can be quite effective in the hands of a seasoned grenadier. The weapon has two fire modes, a primary detonate on contact mode, as well as a secondary two-second- fuse mode that also detonates upon striking an enemy.

Ideal uses for the thumper are in Back Door or Tower defense. The two-second-fuse setting allows the user to fire around corners, saturating a target or area without visual contact. In addition, when loaded with a supply of Jammer grenades, they can be quite handy eliminating minefields on Galaxy drops when a Command EMP is not available.

Aspiring Special Assault soldiers should start by loading Fragmentation grenades into their Thumper. Many new players complain of a prompt grief-lock due to accidental team damage while using the Thumper, often while launching Plasma grenades. Fragmentation grenades have a smaller explosion radius and lack the aggravated damage-over-time of their Plasma counterparts, and as such, produce less grief for the Thumper user.

This weapon is one of three available with the Special Assault cert, the others being the Rocklet Rifle and the Radiator.

Merit-qualified kills with the Thumper count towards both the Grenadier and [Special Assault]../merits/SpecialAssault(Merit).md) Merit Commendations.