These devices enhance a soldier's abilities such as speed, senses, stealth, healing, or data analysis depending on the implant chosen. The terminal is able to install up to three such devices in a trooper based upon Battle Rank.

Implant Terminals are located in the HART buildings in each Empire's Sanctuary and in Bio Laboratories only.

These terminals are destroyable. The only reliable way to destroy one is to put two boomers near the top of the terminal on the side. Other weapons will have a very hard time damaging the terminal as the hitbox is so small.

Note: To hack an Implant Terminal using the Hacking Certification, stand at the front of the terminal and point your REK near the top of the device to start hacking. 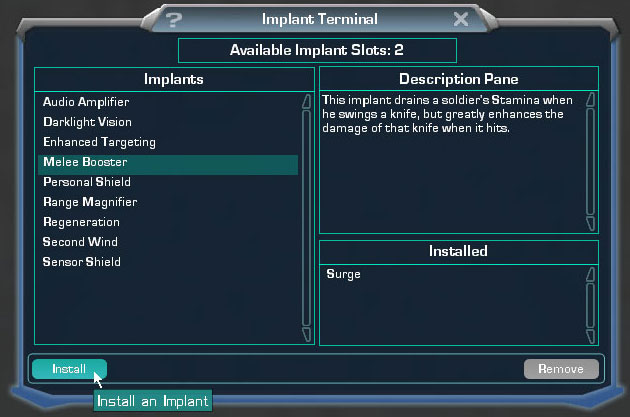 The Window pictured to the right allows the user to install implants from the left pane or remove them from the right pane.