Sony Online Entertainment (SOE) is a computer game development division of Sony which seems to specialize in Massively Multiplayer Online Games. SOE is best known for creating EverQuest, Star Wars Galaxies, and PlanetSide, which all have thousands of subscribers. SOE was originally Verant Interactive. 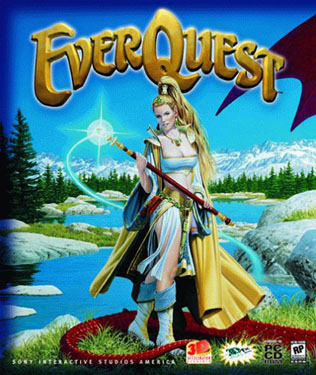 EverQuest, which is, by far, Sony Online Entertainment's most popular game, was released on March 16th, 1999. EverQuest can be seen as Sony Online Entertainment and Verant Interactive's start, as an internal Sony division, Sony Interactive Studios America (SISA), which was formed in 1995, put John Smedley in charge of the development of a game that would become EverQuest. Brad McQuaid and Steve Clover were hired as programmers for EverQuest.

Sony Online Entertainment was born in April 1998 when Sony Online Ventures with Sony Pictures Entertainment. SISA became 989 Studios, and EverQuest, which was credited as being developed by 989 Studios and published by SOE, entered beta at around this time. Most of 989 Studios began to focus on PlayStation development, while the online division spun off and, at first, became RedEye Interactive and then finally becoming known as Verant Interactive.

In April of 2000, SOE hired Raph Koster and Rich Vogel from the Ultima Online development team to develop a new game entitled Star Wars Galaxies. This was a new foray into massively multiplayer online gaming, combining a popular franchise into a massively multiplayer setting. The game attempted to attract a large fanbase with a popular franchise. SWG was released in 2003 and saw rapid growth to 300,000 subscribers but hasn't seen major growth since then. Star Wars Galaxies has received two expansion packs, Jump to Lightspeed and Rage of the Wookies. Currently the game is experiencing a major overhaul labled as the NGE. SOE has decided to focus on a younger age group that lets you take missions for heros and villians from the movies instead of building your own cities and such like it was for the past 2 years.

Sony Online Entertainment has taken several new leaps in Massively Multiplayer Online gaming with the releases of PlanetSide and EverQuest Online Adventures. PlanetSide was one of the first massively multiplayer online first person shooters, while EverQuest Online Adventures was one of the first PS2 MMORPG's. Neither turned out to be as popular as SOE's other MMO's, but SOE still maintains them regardless.

On January 17, 2005, SOE announced it's new feature called Station Publishing, which is a new label for distributing titles made by other developers. The first games under this process are Turbine's Asheron's Call: Throne of Destiny and Ahseron's Call: Throne of Destiny expansion packs. SOE also makes more casually oriented games through Station.com, including Jeopardy! Online and Cosmic Rift