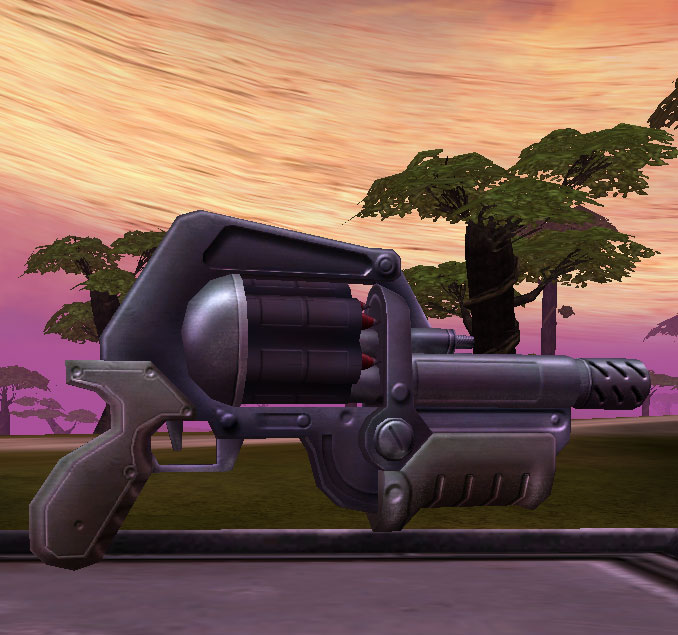 The Rocklet Rifle is a medium-range compact rocket launcher. Each launched rocklet packs a significant explosion that is equally effective against vehicles and infantry.

The secondary fire mode fires all remaining rocklets in the clip in rapid succession. However, this mode is considerably less accurate than the primary setting and as such is best relegated for use in short to medium-short range.

One of the best uses for this weapon is to clear ACE devices. It can take out a spitfire easily while being outside of its firing radius. It can also detonate mines with one direct rocklet hit. When in secondary fire mode, you can deprive a MAX unit of all armor in mere seconds, leaving it vulnerable to other friendlies to finish it off. It's best to turn auto-reload off when using this weapon, so you can switch to a secondary weapon to finish your target off quickly without waiting for the long reload time, as it's rare to kill a Reinforced Exo-Suit in one clip (since all 6 have to hit).

As of the 3.6.9 patch, the Rocklet is also capable of firing fragmentation rounds as flak that explodes within the proximity of aircraft. The damage from the flaklet does less damage per round than the rocklet on aircraft, but its ability to explode nearby without actually hitting the target can be worth it. Note that when used on ground targets, the Flaklet does very little damage (i.e. almost completely worthless). See Fragmentation Grenade Pack